There are several processes of moulding plastic to transform it into useable shapes; each method has its own benefits and requires specific expertise and skill to execute. While the injection moulding process is one of the most widely used, other processes include:

Please see below for a brief description of each process and/or wait to download our flowchart (coming soon) which explains the applications best suited to the different methods. 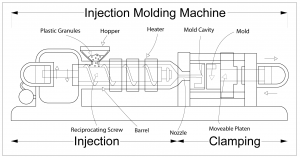 Injection Moulding is a high production process of producing a vast variety of thermoplastic parts into shapes ranging from fairly simple to quite complex. Injection mould cavities are fed with melted plastic material that is forced under high pressure through a sprue, which feeds a runner system, then through a gate into the cavity. The material is then cooled to the point that the material is solid and then ejected from the mould as a finished part. Certain thermoset materials can also be injection moulded after several modifications to the standard injection moulding machine are affected.

Reaction Injection Molding (RIM) is similar to injection molding except thermosetting polymers are used, which requires a curing reaction to occur within the mould.

Rotational Moulding involves a heated hollow mould which is filled with a charge or shot weight of material. It is then slowly rotated (usually around two perpendicular axes) causing the softened material to disperse and stick to the walls of the mould. In order to maintain even thickness throughout the part, the mould continues to rotate at all times during the heating phase and to avoid sagging or deformation also during the cooling phase. 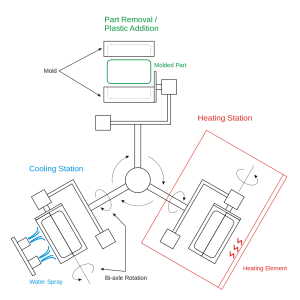 Blow Moulding is used to create hollow plastic objects such as bottles and jars in large quantities. The blow molding process begins with melting down the plastic and forming it into a parison or preform. The parison is a tube-like piece of plastic with a hole in one end in which compressed air can pass through. The parison is then clamped into a mould and air is pumped into it. The air pressure then pushes the plastic out to match the mould. Once the plastic has cooled and hardened the mould opens up and the part is ejected.

Compression Moulding is the first technique developed in the early 1900s to mould Bakelite (phenolic) moulding compounds. It is used today to process many varieties of thermoset plastics and composites including phenolic, epoxy, melamine, and diallyl phthalate. The compression moulding press is simply a vertically oriented hydraulic press. Compression moulding lends itself to relatively simple parts, but since there are no sprues, runners or gates through which the material must flow, the material can be heavily loaded with a composite of fillers and fibrous reinforcements which remain in a random orientation in the moulded part resulting in superior strength properties. 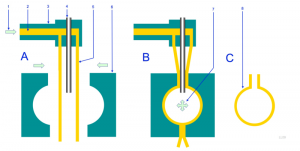 Extrusion Moulding is a manufacturing process used to make pipes, hoses, tracks, rods, and fibre. The granules melt into a liquid which is forced through a die, forming a long ‘tube like’ shape. The shape of the die determines the shape of the tube. The extrusion is then cooled and forms a solid shape. The tube may be printed upon, and cut at equal intervals. The pieces may be rolled for storage or packed together. Shapes that can result from extrusion include T-sections, U-sections, square sections, I-sections, L-sections and circular sections.

Rotocasting (also known as rotacasting), by comparison, uses self-curing resins in an unheated mould, but shares slow rotational speeds in common with rotational moulding. Spincasting should not be confused with either, utilising self-curing resins or white metal in a high speed centrifugal casting machine

Transfer Moulding is another method for moulding thermoset materials where the design of the part is too complicated or unsuitable for compression moulding. Transfer moulding is often used when metal inserts, studs, connector pins wear plates, electronic components or other parts are moulded into the part.

Thermoforming is a manufacturing process where a plastic sheet is heated to a pliable forming temperature, formed to a specific shape in a mould, and trimmed to create a usable product. In its simplest form, a small tabletop or lab size machine can be used to heat small cut sections of plastic sheet and stretch it over a mould using vacuum. This method is often used for sample and prototype parts. In complex and high-volume applications, very large production machines are utilised to heat and form the plastic sheet and trim the formed parts from the sheet in a continuous high-speed process, and can produce many thousands of finished parts per hour.

Vacuum Forming is a simplified version of thermoforming, whereby a sheet of plastic is heated to a forming temperature, stretched onto or into a single-surface mould, and held against the mould by applying a vacuum between the mould surface and the sheet. The vacuum forming process can be used to make most product packaging and speaker casings. It is also used to fabricate car dashboards.

Blown Film Extrusion is used in the manufacture of plastic film for products such as shopping bags and continuous sheeting. This process is the same as a regular extrusion process up until the die. The die is an upright cylinder with an annular opening similar to a pipe extrusion die. The opening diameter can be a few centimetres to more than three metres across. The molten plastic is pulled upwards from the die by a pair of nip rolls high above the die. Changing the speed of these nip rollers will change the gauge (wall thickness) of the film. Around the die sits a cooling ring that blows air onto the film tube as it travels past. The air flow cools the film as it travels upwards. This film can then be slit, spooled, printed on or cut into shapes and heat sealed into bags or other items.

For further information, visit our pages on the what is the injection moulding and the advantages of injection moulding. If you would like to know more about AV Plastics, please go to our Products & Services and Manufacturing or About Us pages.